What SPEEDMASTER are you wearing today?

The Omega Speedmaster is one of the most iconic and thought after watches.

The ‘Speedy’, as it is often lovingly called, is also well known as the "Moonwatch", as it was the first watch to go into space and eventually to the moon.

It seems ironic to me that the Rolex "Cosmograph Daytona" associates closely with car racing and race car drivers, whereas the Omega "Speedmaster" associates with the concept of space exploration and cosmonauts.

Nevertheless, initially, the first Omega Speedmaster CK2915 ‘broad arrow’ was introduced as a racing and sports chronograph and it was originally marketed to car enthusiasts to help measure land speed.

It was one of the first watches to place its tachymeter outside the dial.

The Speedmaster however caught the attention of NASA when Wally Schirra wore his own private Omega Speedmaster CK2998 aboard Mercury-Atlas 8
(Sigma 7) on October 3, 1962.

(The Ck 2998 was re-edited with a special edition in 2012, the Speedmaster FOIS (First Omega In Space) that features the same case, dial and hands design)

The CK 2998 is the first watch ever worn in outer space.

A committee was put together and finally in 1964, the Speedmaster CK 105.003, along with 2 other brands (Longines and Rolex), was put through a series of processes called the “Qualification Test Procedures,” which included 11 different tests:​
Only the Omega Speedmaster survived and NASA declared it operational for space exploration and flight certified: ‘Operational and environmental tests of the three selected chronographs have been completed; and, as a result of the test, Omega chronographs have been calibrated and issued to three members of the Gemini Titan III crews.’

The ST 105.003 went on to be the first watch ever worn outside of a space capsule.

Gus Grissom and John Young wore the first officially qualified Speedmasters on Gemini 3 on March 23, 1965. Several months later, Ed White made the first American space walk during Gemini 4 with a Speedmaster 105.003 strapped to the outside of the left-side sleeve of his G4C space suit. 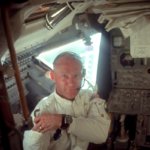 Neil Armstrong however had left his 105.012 Speedmaster inside the Lunar Module before setting foot on the moon.

Therefore, Buzz Aldrin's 105.012 Speedmaster became the first watch to be actually worn on the Moon. 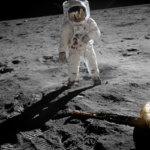 Ironically, the 105.012 Speedmaster lacks the inscription: "The First Watch Worn on the Moon", which subsequent models carry, since their manufacture predates the Moon landing.

As an interesting side note: In 1968, American insurance salesman Ralph Plaisted and three companions were the first confirmed expedition to reach the North Pole by land on snowmobiles. The team successfully used the same reference 145.012 Omega Speedmasters as the Apollo program along with sextants for navigation. 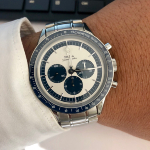 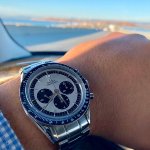 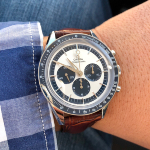